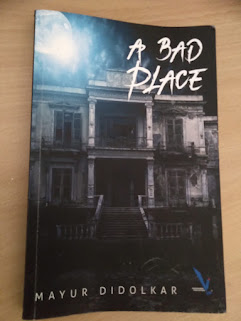 A Bad Place
A confession from me first: I do not have a taste for the thriller-horror-supernatural-ghostly-other worldly kind of genre. So having received Mr Mayur Didolkar’s book ‘A Bad Place’ was a test of nerves for me whose dalliance with this genre has been far too less for me to claim of any accumulated insights about it. However the story has kept up my interest spiked from the first chapter itself and I have found myself curious to know the twists and turns about to be unleashed upon me. As curious as the characters in the story who knew some new facet/twist/shock was expected and yet they opened the forbidden door to enter and came out uninjured but changed nevertheless every time. And I too exhaled in relief! The author has used the local Maharashtrian lingo and set up for his story premise but that doesn’t mar the narrative. It effectively helps one place the story in its right background and moves it to the cityscape to show the choices, turmoils and decisions of a modern day resident who has to also deal with a superstitious ‘humbug’ of the supernatural elements. Despite the modern setup of the story I had butterflies in my stomach while reading. The writing is good, clear headed, pictorial and engaging. It’s a goodread for anyone that loves the unsettling feeling as if being in ‘A bad place’.