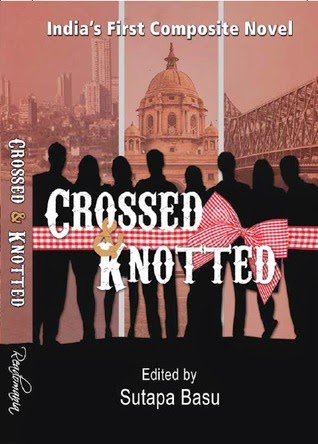 Crossed & Knotted is India’s first Composite Novel, a book written by fourteen authors in close collaboration with each other. The chapters, each a story in itself, are knotted with one another through characters, events, settings and emotions. The result is a read that criss-crosses through a multitude of emotions bringing out deep rooted human desires. They narrate tales of love and betrayal, suspense and mystery, courage and dilemma, along with hope and resilience. Read it for a taste so tantalizing, that your mind will surely be craving for more!

Crossed & Knotted as a composite novel comes out as one whole bunch of flowers in a bouquet, varied in colours and design yet joined at a common point. This being an experimental genre gives a unique opportunity for creative writers to excite their creative juices and bring in an individual voice unique to each one of them. The novel is therefore naturally not a straight take off about a single story but has a different takes on the various characters as a separate entity with every writer’s imprint on them. All in all a very interesting and enjoyable read all through the 14 stories. Here’s a brief look at what the stories have to offer:
Beginning with Sutapa Basu’s story ‘A Curious Dalliance’ which has Sudip Roy’s wife Megha dying of a curious disease leaving behind a daughter Shivi, in-laws and of course her husband. Shivi is a grown up girl in the next story by Ayan Pal- ‘The Diary of Joseph Varughese’ who is inordinately fond of collecting old diaries and which could turn into her undoing in this thriller-ish story with her boyfriend James emerging as someone we wouldn’t think he would be. The novel diverges into the lives of various characters not holding on strictly to the original characters or story line so that we have Shivi’s friend’s Siya getting a lead place in the next story by Sanchita Sen Das- ‘The Web of Life’ and we venture into the esoteric realm of karma and regressive hypnotherapy.  The novel takes an unexpected route into fatalism and rhetorical musing regarding the aim of writing a story in ‘The Real Fiction Of Illiana Braun’ by Arvind Passey as he effortlessly  merges real life characters of the novel within his own story to surprising results while also propagating the diary as a perfect prop to advance a story line. ‘A Burning Candle’ by Mithun Mukherjee has Illiana  make a new friend in Catherine and find her nemesis in her quest to find the truth about Lily Brown whose story took shape in Kochi and where Illiana found herself in on a trip to India for a workshop on Architecture. Her brief acquaintance with Illiana leads Catherine- a journalist on a mission to Afghanistan to cover a story on situation of women and children there in the next story ‘Relic to Ruins’ by Avanti Sopory. Through her, we get a peep into the life of people in present day Afghanistan as well as that of Jameela and her children. ‘Leap of Faith’ by  Bhaswar Mukherjee, moves the story of Jameela- a fiercely independent  and progressive woman in an atmosphere that encouraged the subjugation of women and the weak but who manages to fight it while her daughter Rukhsana is able to break free of  it all completely and make a life for herself in India. ‘Reclaiming Life’ by  Anupama Jain shows an aspect of women in India not really in control of things concerning themselves as portrayed by Poorni, who is a friend of Rukhsana aka Dimpy, and is helped by latter to gain her lost ground in a patriarchal society as ours. Kamu aka Kamala Devi is the ‘Dragon Lady’, also Poorni’s vampish mother-in-law who has been illustrated vividly by Deepti Menon  in this story that explains why and how she came to be called the ‘dragon’. Her scheming and machinations lead everybody become afraid of her and thus making her succeed in her plans. This is how she also manages for her under qualified son Pankaj to have a better educated and simple girl Poorni as his wife. Pankaj’s younger brother Binoy leaves his mother’s home to find his own bearings in ‘For a Speck of a Moment’ where Amrit Sinha brings to light the terrifying moments of the Cafe Leopold and German Bakery bomb blasts through Binoy who has reached Pune to make a life for himself. He moves ahead in life in ‘To Ma & Pa, Con Amore!’ by Monika Nair, managing to find a wife in Mona Lisa who brings out the struggle between two generations, one- her father Shankar preferring the small town while she her self, the city life.
‘Look Beyond’ by Amar Lakshya Pawar reconnects the lives of a happy couple namely Aditya and Meena, destined for a tragedy as Shankar tries to lend a helping hand in the melee. A recently widowed Meena tries to build a new life with Sudip Roy without knowing much about his past in ‘Dawn to Dusk’ by Bhuvaneshwari Shankar. This penultimate story brings around the story line to the cast of the first story and gets anchored in the end chapter called ‘The Last Act’ by Arpita Banerjee. It attempts to bring a logical closure and peace to the demons raised by Sudip’s actions although quite dramatically!

Sutapa Basu is an Honours scholar from Santiniketan and holds a Masters degree in English Literature. Her professional career has seen her as a teacher, editor, and publisher. She has worked with renowned international publishing houses like Oxford University Press and Encyclopaedia Britannica. In the last five years of her professional career, she has launched 111 educational titles, 33 CDs and digital products, a language lab and a website. She has also developed and edited over 450 books over the last thirteen years.

India has traditionally been the land of storytellers and a lot of us have an inherent skill of creating good plots, stories and narrations. With a little encouragement and support, many more authors can be widely read. This is the essence of Readomania-an initiative that nurtures emerging stars of the literary world.

Readomania is an online content discovery platform that brings to life a whole new literary world, with stories, authors, books and a lot more. We also have a publishing house that takes the best of Readomania from the online format to print editions and launches debut authors. Our focus is to bring to the market, new authors and novel concepts, a composite novel being one of them. Our previous book, Chronicles of Urban Nomads, a collection of short stories, was also an experimental publication.

It would not be an exaggeration to say that Readomania is the talent hunt in fiction that goes a step beyond, nurtures talent and showcases it to the world, in the process, creating a powerhouse of content.

Our website also has a lot in store for the reader. Since the content is edited and curated, by a strong team of editors, readers get quality reads on a platter. The variety on Readomania is impressively vast; we have romance, emotions, thrills, travel, humour and drama.

Accessing Readomania makes for a perfect break of fifteen minutes from your daily grind. The website was launched in January, 2014 and is already very popular with about 3500 registered users, of which 300 members are active contributors and authors. The site also boasts of 800 online publications and more than three lakh page views till date.


This Tour is Hosted by